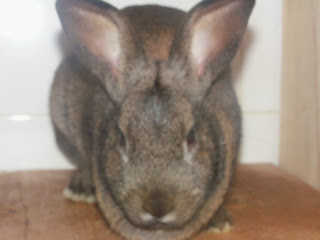 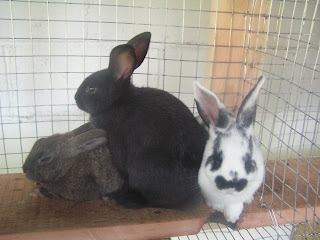 The hutches are outside in a sheltered location, but my husband still made them all bunny huts. They had been seperated for a little while by that point. The broken bunny (black & white) is mellow but attention crazy. (He is the first to run up when the door is opened and ready to get out. They're spoiled rotten.) My husband wasn't thinking and put him in the doe's cage for a quick moment so he could get the box in without worring about squishing or the buck escaping. Less than 30 seconds and Quick Draw was done.
He thought they were too young yet, but still marked that calendar just in case. Sure enough- sub zero weather set in when she was due. He felt around in the box and found.... nothing. Breathed a sigh of relief and then confessed.
Then there was the ice storm almost 2 weeks later. The hutch was covered so they were dry and tons of straw in their cage. All 3 snuggled into their bunny huts at night. When morning came..  he found 3 tiny dead bunnies in front of her nestbox. We moved the doe and her box inside asap. It seems she had them buried so far under the straw they were really hard to find. 1 passed shortly after bring them in. Now there are just 2. They grow so fast that these little goobers doubled in size in a week. They are really chubby bunnies that are eating hay and bouncing around all night long. 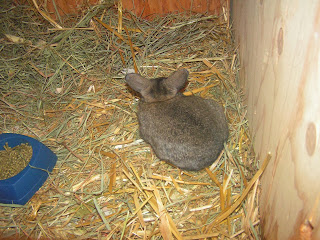 Ears fully deployed.. this goober is wider than it is long. 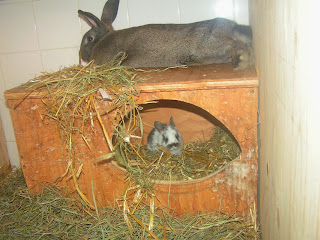 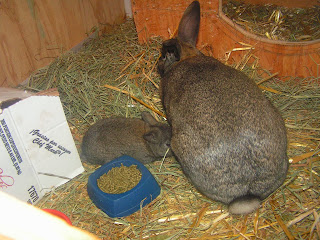 The chubby brown (agouti?) bunny has Dad's personality. Loving to be petted until it falls asleep. 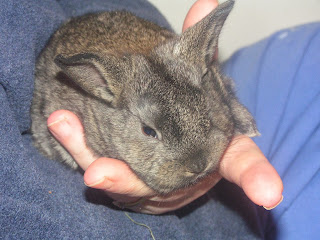 ﻿
The doe has calmed down too and now also demands to be petted. Put your hand in her cage and she runs up, then shoves her head into your hand. While she lost most of her litter, she still did amazing considering the weather. Many around here lost all of their litters.  In the meantime we have a full house. These 2 may go to a local breeder who got us our original 3 and join his breeding stock. (Or we may just end up building a ton more hutches.)
Before the bunny surprise.. Roy got injured. Doing the head count we realized one was missing. We searched for an hour before my husband found him... limp. He bundled him up and home we raced. Honestly didn't think he would make it through the night, he was a bloody mess. He did. It was hard to judge what was wrong at first.. he was moving so oddly- or rather not moving. He wouldn't eat pellets.. he wouldn't drink water.
The week before we had helped out a local farmer with harvesting their vineyard. We did it just for fun. After picking the wine grapes, they offered up as many Concord grapes as anyone wanted. We loaded up several 5 gallon buckets and barely made a dent.
It seems Roy... goes absolutely insane for Concord grapes. As his injury went right down to the bone on his leg, and within hours of getting him home we realized it was infected.. We dosed his grapes with antibiotics. Easiest way ever to medicate that bird. Just getting him to eat anything was a challenge- so I pulled out all of his favorites that he just couldn't resist (melons, grapes, tomatoes, applesauce).. anything juicy just to make sure he was hydrated and got some nutrients.
3 months he was in our HOUSE. The first few weeks he couldn't move- so I would carry him to the yard and herd cricket at him.
40 years old- I'm on my hands and knees crawling across the lawn herding crickets at a disabled rooster. When you are living in rural nowhere- that right there is how you know you are having a mid-life crisis. The neighbors don't say much- just look at you sad and send over a casserole.
He slowly... slowly...became more and more mobile. Then at some point he was mobile enough to start stalking me in the house. 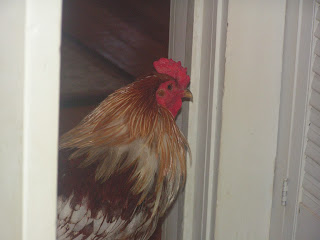 Ear plugs are the greatest thing ever if you have a housebound rooster stalker. He learned to crow to demand treats. We under-estimated how many Concords he would eat- or rather how long it would take him to heal and had to buy him grapes. (Please excuse the dirty floor! Even though I had to wash all the floors every day- he took to squishing grapes and making a huge sticky mess in just seconds.) 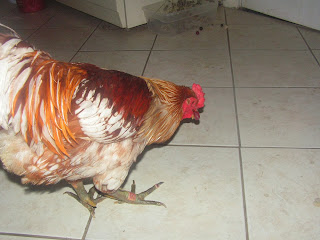 When he started hopping on to my nightstand so he could crow as close as possible to my face at 5am.. it was time to get this gimp back to the coop. You can see a little part of his injury in the picture above.
He's used to foraging so I put a few things out for him to discover. His radish seed stash.. cranberries nearby. He hopped into my seed bin and had a field day- I about had an aneurysm with that catastrophe. Next year will be interesting as most of the tomato seeds are now jumbled as all are the Brassicas (kale, broccoli, mustard, cabbage, kohlrabi, turnip, etc.) They all look the fricken same.
I made big salads and a roast one night. My husband had a rough day and was exhausted. He fell asleep sitting on the couch with the salad in his lap. He woke up to Roy on the couch next to him.. completely wound up and happy making a racket. He was eating my husband's salad- in particular he was sooo excited over the shredded cheese on it. It's really hard to be irritated when something funny is happening at the same time.
Sanity eluding our sleep deprived selves- it got to the point where Roy would sit on the couch next to my husband watching tv and eating dinner. Yeah.. Roy got his own bowl of people food.
He's back in the coop. Back to running around with the girls. He crows a lot less now, and is very content. He still has a bit of a limp, but can run, scratch, jump pretty well. Well enough that the girls think he is hot stuff.

Hope everyone is doing well. Wishing you all a Happy New Year!!
Posted by Anne at 10:30 PM 5 comments: Links to this post

Anne
a tiny town in NW Illinois
I'm a married, proud mother of one very creative and independent daughter. I always need to create something, usually full of ideas, and always dreaming.